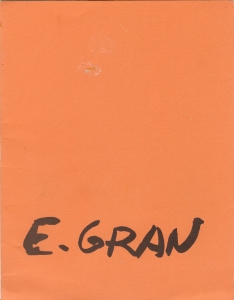 mage after his death.

Now Enrique Gran has completed the circle of his life, since he met his death on January 8, 1999 in an impressive way. Perhaps because he was born on the Day of the Dead in 1928, he always had death as his neighbour, and he spent a lot of time researching the afterlife. He was an expert in parapsychological matters, and according to his account, he was in contact with extraterrestrial beings of dual origin: some from remote planets not yet discovered by the telescopes installed in ours, and others from the spiritual world not yet captured by our matter-dominated senses.

His beliefs and his confirmations, because he had received them, influenced his art. He painted with physical materials, naturally, but what he reproduced was beyond tangible vision. I know that Gran possessed extrasensory perception, and that he could enter into the psychomagic states, term with which parapsychologists designate the techniques that favour the deepening of the levels of consciousness.

A SPIRITUAL WORLD Gran’s pictorial technique made him be considered by the critics a final exponent of abstraction. It is true, but those amazing landscapes that he knew how to bring to the canvas are not only abstractions, but spiritual worlds that he saw with his supra normal perception. I can say that because we were friends and neighbours, and shared psycho-biophysical experiences.

That is why his painting is so realistic, without leaving abstraction. The landscapes transcribed by him to reality he contemplated exactly in the depth of his spirit. They seem strange to us if we confront them with nature, but we understand them easily if we look inside ourselves. And he needed an enormous mastery of matter to be able to give them the right form on the canvas, to materialise the spiritual.

SUPERREALIST ABSTRACTIONS That is why I would propose to qualify his works as super-realist abstractions. It is a chaotic denomination, because it unifies two very different tendencies in the aesthetics of the 20th century. However, it is true that Gran has to be inscribed in the abstraction, and that his works derive from dreamlike visions coming from his psyche: consequently, the qualification pointed out faithfully picks up the double inspiration of his realizations.

One can immediately see his sincerity and purity. Those of us who were lucky enough to be his friends know that Enrique Gran was always faithful to his feelings, and that he lived his art in the purest way. It is possible to affirm that he carried out his painting with the same devotion with which the alchemists executed what they called the Great Work: the inner search of the spirit. With equal dedication and passion he made his painting, without any economic consideration.

THE TIME OF THE WORLD

The titles he gave to his paintings show the origin of the themes. Very often they allude to time, his great obsession: like Augustine of Tagaste, he felt what time is, and yet he could not put it into words.

We spent more than an afternoon discussing this incomprehensible mystery. To master it, he painted it. Other titles point to the “n-dimensions” of our physical world, which he eagerly explored so as not to lose any detail. On other occasions the titles refer to esoteric characters, such as the spy or the envoy, or simply the being. I don’t know to what extent Gran was an initiate in occultism, but what we can all see is that he described an unusual world with great technical skill and great expressive purity, a world in which he perhaps finds himself now, feeling that time is eternity.