The art and humanity of Enrique Gran. José Luis Ocejo (2004)

Text included in the book “El hacedor de sueños”, published on the occasion of the exhibitions in homage to Enrique Gran. 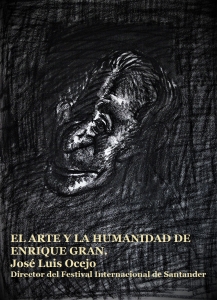 THE ART AND HUMANITY OF ENRIQUE GRAN

Text extracted from the book “The Dream Maker”, published on the occasion of the exhibitions in homage to Enrique Gran.

Thirty editions of the Santander International Festival and my third year as a director. Enrique Gran, whom I had long admired, was the author of the poster. A great lover of music, he received the commission with the enthusiasm that he always put into the things that I liked, and that pushed him to come to the office again and again to show me the first sketches of what would later be a beautiful mermaid turned into a violinist in front of an idyllic sea, undoubtedly that of our bay. Afterwards, he proposed, together with his friend and also painter Manolo Maleras, to coordinate a large open-air painting exhibition with young artists, and thus ennoble the worn and unattractive exterior walls of the Plaza Porticada. For two consecutive years he enthusiastically led this initiative in the enclosure which, at night, invariably welcomed him as one more spectator. Enrique loved music to the extent that he constantly needed it to paint his pictures.

I remember him clearly as he was, tall, very tall, with his eternal blue hat, his big hands and his shy childish smile, oblivious to any pictorial trend or fashion that, I believe, he despised inside. His paintings were his life and to conserve them was, for Enrique, his greatest wealth and illusion. Selling them was a pain, except, I was once told, if I could follow their trail so that I could look at them from time to time. His painting, for me, is like no other, and I admired it deeply. I was trapped by those “stem cells” that sometimes looked like snails to me, from which grew forms that, like enormous arms, tentacles, rays or spirals, offered him the opportunity to show us his great mastery of light and colour.

One day I also asked him for some small sketches for a commemorative booklet of the Salvé Choir. He came to see me in one of his usual stays in Santander, bringing with him several sheets of ordinary paper which he showed me and saying: Look, I have made some “drafts” for you to choose the one you like best. And those “drafts”, as he said, were small drawings made with black ink, which, like spirals, represented the song of the Orfeón in a dreamlike way. All of them surprised me very much, because, in his usual humility, I didn’t understand how I could like them so much that for him they were nothing more than mere and amusing “scribbles”. Scribbles, or rather, “blotches” that had clearly come from the hand of an artist.

Shortly afterwards, Enrique Gran left us in silence, unwillingly, as he always wanted, to bother anyone and, surely, with his shy childish smile, but his art, and above all his great humanity, will always keep him alive in the memory and admiration of everyone.