Exhibition held at the Conde Duque Cultural Centre in Madrid.

Text for the exhibition catalogue by Enrique Gran. 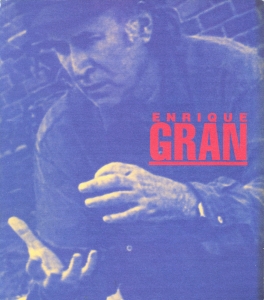 Conde Duque Cultural Centre, Madrid. 1998 I wrote some time ago that Enrique Gran’s abstract landscapes cannot be compared with anything. This meditative painting, profuse with dramatic intent, is not easy to describe. The matter in Gran’s paintings is there, unctuous, nourished, precious and even precious, but the forms and we could say that the themes – although abstract is a thematic painting, supported by an expressionist backbone – are telluric and planetary images. Full of energy they move luminous, red-hot, in immense areas, whose calm contrasts with that movement. It seems that we are witnessing with them an impulse of matter in formation. That faithful portrait of something that we do not see in the reality of the everyday world – but feel like a vertigo of wonder, overwhelmed by its greatness – we “recognise” it in these paintings with ease. Gran has raised before us a ghost of the most intense reality, of a reality that we carry within us. Gran paints luminous catastrophes, which objectively would be nothing more than dynamic objects that evolve and are transformed in nature. This is what we see in these paintings, which look at all this from a formidable observatory – occupied in this case by the spectator from whom, out of danger, we can say: “What a beautiful movement of, earth, what a tender birth of a mineral source of fire”. For Gran, the universe is a theatre where those atrocious and intimidating phenomena of life, felt with extraordinary precision, take place. Gran’s paintings thunder in silence. They thunder and even howl, because they are like great mystical howls. Gran has found himself, translated, dummied up and put within reach of the spectator a “broken reality”, exposed as an endless kaleidoscope, with an unpredictable variety within its repetition. Nor is it easy to define him as a painter, which already guarantees his rarity and originality: Surrealism, abstract expressionism or magic informalism? Because the strange impression of reality, that there is an air, a space, some confines, some horizons cannot be avoided when considering these paintings, abstract and illusionist at the same time. This was not the first objective of the abstract movement, which was extremely formalistic. On the contrary, this painting is descriptive, even environmentally, of a perfectly dreamed-of vision. They have the emphasis of transcendental apparitions, visions that Moses could have had, to testify to the terrifying greatness of God, images also of an inexorable apocalypse, but seen by a distant being. When I judge such a strange painter, I want to imagine how many artists from the past would approve. Leonardo, Archimboldo, Turner, the Symbolist visionaries such as Gustave Moreau or Odilon Redon would have appreciated his paintings. I am not quoting Spanish painters, because they were not visionaries until well into the 20th century. The intention of this very particular message “is understood” perfectly, it communicates by means of many romantic elements and with a presumably realistic forcefulness, defining an interior landscape “Mental landscape with accident” could be called all the paintings of Enrique Gran. It is my opinion that this painting has not been appreciated in all its material and spiritual value and given up by the most radical movements, whose will was to strip the painting of its representation, to leave it converted into an arcane object, of laborious access, that does not imprint on the spectator a defined and clear feeling, unless it is rigorously plastic. This total essentialisation marks the objective “dehumanisation of art” that Ortega defined, not without a certain disgruntled amazement. Gran’s painting is still human and humanist, his message, while “enormous”, is simple and direct; there is still something “Dantesque” in the work of this hallucinatory painter. Let us try to put Leonardo’s The Virgin of the Rocks before a mental landscape of Enrique Gran. We can be surprised that this mineral and action landscape harmonizes perfectly with such exquisite painting.

Gran’s pictorial material could not be denser or richer in nuances, based on an indefinable tonal harmony. Opaline lights, dense fogs, figurative draggings of matter that are perfect trompe l’oeil of verisimilitude, as of something that has been “copied”, translated into plastic terms with great care. The impression that we are contemplating a “truth” that does not exist, I repeat, places Enrique Gran on a separate shelf.

Since the exceptional – which seems to be the rule of much modern art, stagnant with abstract “fundamentalism” – forces everything to be offered to us as exceptional – but of boredom in most cases – the truly exceptional is very concealed, modestly withdrawn, hidden and one must make a great effort to look for it. The exceptional is not found overnight, it is not invoked or summoned when it is wanted. It appears, it appears to very few artists, through long and hard work. Gran is one of those few who had “a revelation” with very defined profiles and has spent a lifetime refining his possibilities, giving him all his energy. All his energy put in the service of a very graphic and plastic representation of the energy itself. – “There goes that force. Who sends it to me?” -It is a mystery of your perception and, thus, you have known what many others have not been able to know, but you will give them a faithful transcript by means of brushes, spatulas, colours. You are a painter because fatality has wanted it that way and your vocation is to philosophise with your pulse, to think with your senses, to feel planes that move forward and backward, perceived by a mental radar capable of dramatising these things. It is a way of being, you cannot paint in any other way and you are obliged to bear witness to this world that simply runs through your veins”. Let this imaginary dialogue serve to define that painters of your species secrete paint from every pore of their body, just as others may be rheumatic or diabetic.

As a dense painter, Enrique Gran forces us to refine our perception of his painting. I am not saying that mine is the fairest, but I place myself on the same level as any ordinary spectator, who only briefly understands painting, but is attracted by it, without school prejudices, still not very impressed by what is considered to be the avant-garde, rather imposed by a trade, which throws up rigged revelations and surprises at random. A spectator to whom what he has nothing to say, but which is form and manner of representation, without representing anything in particular, is bored by this pure material affirmation. That eclectic and vulgar spectator I pretend to be and, in such an arrangement, Gran’s painting always surprises me, it proposes a way of looking at that reality that does not exist, but whose precise image is there, consigned in a painting. I see it as it has appeared to the painter and, without knowing entirely what it is, “I understand it”. My imagination can ride on a good mount, I am given an idea to complete it subjectively. The essential thing is that this plastic idea has taken place and has been the germ of all this spatial and tonic painting, which today extends to the consideration of the Madrid spectator in the Conde Duque Cultural Centre.